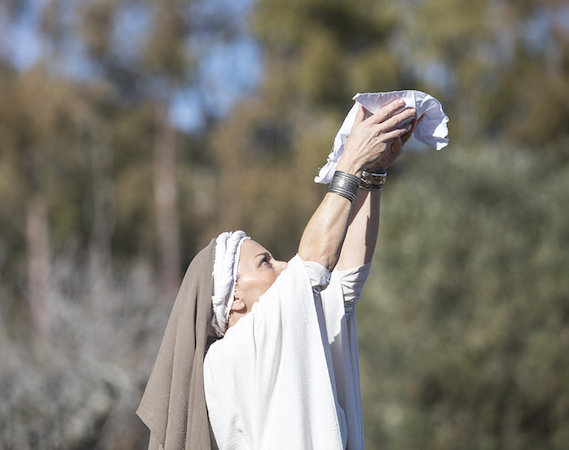 Many former Essenes have returned to Earth again to reclaim their ancient knowledge and to assist in the elevation of consciousness for humanity once again.

In June 2016 there was a special full moon as it fell on the day of the summer solstice or winter solstice depending where you were in the world. This was a rare occurrence and it took place at 12.02pm in the star sign of Sagittarius. Traditionally this full moon is known as the Strawberry Full Moon as it's the time of the year that this luscious fruit is harvested.

Alphedia Arara channels the energies of Mary Magdalene and the Essenes in Fortingall.

The Essenes were a sect, a mystical sect of Judaism who paved the way for the Christ Energies to activate on planet earth 2000 years ago.

Jesus, Mother Mary and Mary Magdalene were all brought up in the Essene tradition and a gathering was held for the Essenes after the crucifixion in Fortingall.

Fortingall is the primary location on earth where the Christ Consciousness Grid activates and powerful leylines criss cross through this region, including the Divine Feminine female leyline that comes down from the Praying Hands of Mary (standing stones) in Glen Lyon.

Fortingall is a small village in the entrance to the beautiful Glen Lyon, one of the remotest parts of Scotland in Highland Perthshire. It is known as the Alpha Grail (Primary) (ingress) Threshold or Grail castle of the Christ energy grid of the planet. That is where the Christ energy grid energies are received, anchored and distributed throughout the earths crystalline grid. It is said* that Jesus visited to receive the Christ energies and that his forebears emigrated to Galilee from Fortingall.

Schiehallion (Hill of the Fairies) is the sacred mountain at the geographical centre of Scotland. At the intersection of leylines radiating across Scotland, uniting many key sacred sites. Home to magical cave systems, and access into other realms and dimensions. Home to the Sidhe, mountain guardians, goharts and many others.

Myself and other powerful essenes wish to join forces with you in this workshop to aid you in the releasing of any pain, trauma and karma that no longer serves your soul.

As the higher frequency light amplifies our shadow sides are being presented to us in order to shine light in. For some of you this is manifesting with ill health, relationship break-ups or inner turmoil and for others it is manifesting in excitement, joy and increasing consciousness, which allows you to reconnect to who you are and your deeper soul purpose.

Many of you were trained in the temples of Egypt, Mesopotamia and also at Mount Carmal, one of the main hubs of consciousness for the Essene community.

Your roles were to prepare for the coming of this new age, and increasing consciousness and if you look at what is going on in the world at this time you are in a similar position to what the Essenes were with the Roman Empire; except the shift you are making is out of 3rd dimensional consciousness into 5th dimensional conscious understanding.In this workshop I will work on aligning your soul with the Great Central Sun.

This will allow you to reset where you are at on your path and to get back on track or to move more fully into alignment with Divine Accord.

I will take you deep into the sacred stone circle energies that are holding a grid of consciousness in Fortingall. Connecting with the inner mysteries, connecting with the ancient knowledge of how to be in harmony, peace and truth with your family, yourselves and your surroundings and assisting you to opening up more fully to the consciousness of oneness.

To feel part of the whole, allow yourself the opportunity to be healed in this sacred land, to reconnect to the Celtic wisdom that is held by the Fortingall Yew – one of the most ancient trees on planet earth – and also to Mother Gaia as a new start as the wheel turns.

Know that through this meditation I will awaken dormant portals in your third eye chakra and work on your holographic matrix through sacred incantations, voice transmissions and colour healing to re awaken the codes of enlightenment within all.

No matter where you are on your path at this time the full moon offers you a fast track towards illumination to see through the veils and to allow you to step into mastery of the soul. For when you step into self mastery you utilise the power of the creator within.

Know that although the energies have been challenging of late, the shift in this moon cycle – although the energy is speeding up during July and August- will allow you to re-focus, re-group and to travel more smoothly along your journey.

It is an honour and a privilege to connect with you this way, namaste, namaste.”