This summer solstice Alphedia was asked to perform an activation ceremony at Machrie Moor Stone Circles on the Scottish Island of Arran.

There are 6 stone circles, one of which is a double circle, these circles are comprised of standing stones and burial cairns.

The standing stone circles date from around 2000BC. The Machrie stone circles are in general alignment with a notch in the skyline where Machrie Glen divides in two. The notch is intersected by the sun on Midsummer Morning. 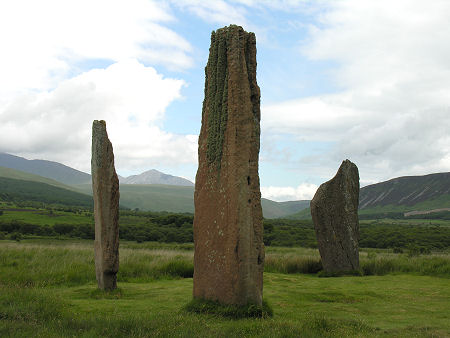 A crystal Skull overlay was performed to heal leylines and the land and create an etheric temple of light for the New Dawn.

Alphedia  then called upon the return of the dragon guardian of these stone circles to reactivate their dormant energy. Then to allow for earth keepers to receive wisdom, knowledge and keys from this important network of circles and standing stones in a channelled meditation.

The double circle of standing stones is a portal to the Sirian star system and codes from this were able to be activated in an activation channelled on the day. Alphedia also performed an honouring of mother earth ceremony.

Channelled Message from the Dragons of Machrie Moor:

“We have called for this earth healing to take place at the solstice of 2014. For this ancient sacred site is now ready to be returned to its power.

This previously was a star gateway for the Sirian star system, as many stone circles were.

The ancient Celts were guided, and we call them Celts because of the land, to gather the energy and to harness it in a concentric circle.

We dragons are now returning our energies to charge back up the stone circles sacred sites.

Key lightworkers are carrying the codes and symbols to assist with this work and we are carrying in our energy matrix, for there are five who guard these circles, and we carry with us the star beings of Sirius’ codes.

By activating this land it is a key part of the conscious evolution of Scotland. To prepare the way for higher frequency new light retuning to the planet.

And as the energy of the land rises, the consciousness of the people do too, in what is a key year for Scotland with the independence referendum.

We dragons ask that the land healing be performed by the skull conclave. Then you will channel through wisdom from the Sirians to explain how this start gate portal will perform in the future. This is all we have to say just now.  Adoni. ”