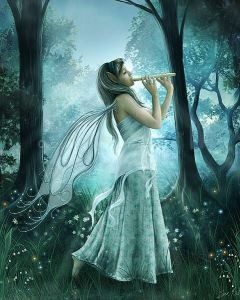 When I first was visited by the Sidhe I had only encountered Elemental Fairies and Fairy Queens such as Fairy Queen Maeve, who was the Guide for my first book Message from Nature’s Guardians. However I knew of the other Faery race, the Magickal Sidhe Faeries as I called them although they are sometimes known as the ‘big’ Faeries, the Gentry, The Fair Folk or the Ancient ones.  All around the world they are called different names.

In the Celtic lands, mostly Scotland and Ireland, an ancient belief is that these Sidhe Faeries once walked among us however because they did not like what Humans were doing to the planet and to their race, they retreated to remote areas which are often known as Faery Knowes or Rathes and took to living underground. It is also believed that they used their magickal powers to shift their energy vibration to become less dense and therefore invisible to the untrained human eye so they could live their lives out away from prying Human eyes.

The Sidhe live in a society structure similar to us Humans with Royal Courts, schools, magicians, healers, warriors and historians. They marry, have children and live often for centuries until they leave the Earthly plane. Generally these Faeries are more suspicious and weary of Humans than the Elemental Fairies.

Modern religions often preached against working with these beings classifying them as evil and demons and the Faeries did not like this particularly as they had often let people be part of their world and taught them their ancient magic and knowledge. Fewer people started to believe in the Sidhe and the need to respect their traditions and ways.

The Sidhe Faeries found life more difficult when Humans started to use iron ore as this is believed to be repellent to Faeries’ energy systems. It reduces their magickal abilities the Elemental Fairies tell me and for this reason they retreated to secluded glens and ancient woodlands to live in their secret world undisturbed by the human folk. Those who live in the country areas generally have a greater respect and understanding of the ‘old ways’ and it is hard to find Sidhe in inner city areas.

My first encounter with the Magickal Faeries happened in February 2009. Fairy Queen Maeve guided me to read a book called The Ancient Art of Faery Magick by D.J. Conway, a respected American Faery Author. I had bought this book over 4 years ago when I started to write my own first book. I was however not allowed to read this book at this time Maeve had said so it had sat on my bookshelf unread.

One day I was sat in the sitting room and my eyes where drawn to the sleeve of this book. As I started to read the book her experiences of Faeries seemed so different to my own. I had not, to my knowledge, met these magickal human sized Faeries and only knew about them from folklore tales and a book written by the Rev Robert Kirk, of Aberfoyle in the Trossachs of Scotland. I only had read three chapters however when I was guided to a secluded woodland at the top of a hill near our house.

A friend had taken me there with him and my instincts took over as I walked our dog Romany towards the trees. I knew he was not welcome where I was going and I tied Romany up to a tree. I could see energy portals opening and feel vibrations shifting as the Faeries called me in through the veils that were unraveling before my eyes. I completely trusted what I was seeing and feeling and my own psychic gifts.

I knew I had tests to pass as I entered into where I thought I was going – Faeryland – and seemed instinctively to know what to do and when I was allowed through. I knew I had been into this realm before and I knew I had to keep my wits about me. I also knew I was being watched, although I could not see by who, waiting to see if I passed their final hurdles before I could be greeted and meet who it was I was here to meet.

All this was done through instinct. I heard no words, saw no visions and felt no feelings but I knew my vibration was shifting but at times I was resisting this trying to stay in the physical realm as my left brain (the logical part) battled with what I was experiencing. I knew I was being taken into Faeryland where the Magickal Faeries dwell. I had brought a gift for this which I didn’t know. A quartz crystal – rose – the stone of love and freely offered it to them hiding it in a hidden nook under a fallen tree stump.

Then they started to appear, Human sized and slender. Magick filled the air is the only way I can describe what I was experiencing. There were no wings about them and I could not see clearly enough to vividly describe their clothes except they were the colours of the Earth. Not much flesh did they show but I was welcomed wearily I could tell.

I realised I was here to be watched and assessed so I stood in awe of the energy around me. Panic ran through me as I thought am I ready for this? Have I got the knowledge and understanding they expect of me, but I knew I must because was I here. I didn’t consciously know the Faery etiquette although I know there is one when you enter Faery land. I realised I had to stop these thoughts racing through my mind and just trust for I did not fear them and I knew they were my friends. My fears were more because of what I had read rather than what I was experiencing. I would not have got this far if they did not want me here and I knew I was summoned by them at this time. I learnt what I had to learn from them and this experience was forming another book I started writing called The World of the Fae.

I have returned many times to their wood in Faery land. Sometime I am very in tune and others I go but cannot sense much of what is happening as my vibrational shifting has not worked out so correctly for me to see and experience fully but I trust them and know they are gaining from me or teaching me at a subtle level. I believe that when you are ready you will be called by the Magickal ‘big’ Faeries to enter the land where they dwell. Where they live in royal courts, ruled by a King and Queen. Where they work and live in a society. Where they perform magick so powerful that it can conquer all and where love is their sole being so connected to this planet we all dwell on.

Yet like in our Human society there are those who have lost their connection to the Divine (the spiritual source) and those who shy away from the love aspect of life consumed by the lower negative emotions. This has happened within the devic kingdom too and even the Faerie race has been split here in Scotland. I was taken to meet the Seelie Court Faeries. This is a Human friendly race and known as the Blessed Court. There is also the Unseelie Court of Faeries who are not Human friendly and who do not wish to communicate with us. Sometimes if you enter a woodland and are Faery sensitive if you get a negative feeling or a feeling of unwelcomeness then you may have entered an Unseelie Court glen.

These Faeries will not harm you they will just guide you to the realisation that you are not welcome here at this time. The two Courts live separately however I am still receiving more information on this, it is always best to be respectful towards the Faeries and regard their wishes. Just like you like people to be respectful towards yourself, the Faeries I have found are no different. If you wish to work with this level of Faery it is best you study their customs unless you are selected by them and then they will teach you all you need to know to work with their kind.

For more information on the Sidhe you can browse the Fairy Workshop Category in the Shop which gives you information on all past workshops, and includes channeled messages from the different fairies. 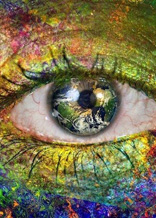